Apparently… What use to be easy to do, now makes one jump though a lot of hoops. However that being said, no one likes spam.

I opened a trouble ticket with my hosting company. I’m waiting on them to return my ticket.

I’ve been up since 3am EST working on this simple problem, and still no joy

Who are you hosting with? There’s a good chance that someone else might be hosting with them and can shed some light on the issue.

And what stack are you wanting to use? You mentioned a few.

While all say the email has been sent, it doesn’t seem to be the case. I received none of my test messages. I double and triple checked to make sure I had the proper email in the stack, but nothing came though.

So apparently there is some kind of setting out of whack with my hosting company. However that doesn’t explain why I didn’t receive the emails

its called qth.com. I’ve been with this guy for 12 years or so. Like I said, everything works fine. Until I tried RW8

I used the ‘contact form’ within RW8.
A stack called contact from Doobox
and the form stack within Foundry

All of these (except for Foundry) send back an error. The foundry doesn’t do anything, but sits there.

For the Foundry ones, please try to use the settings you can apply there.

For the normal Form: 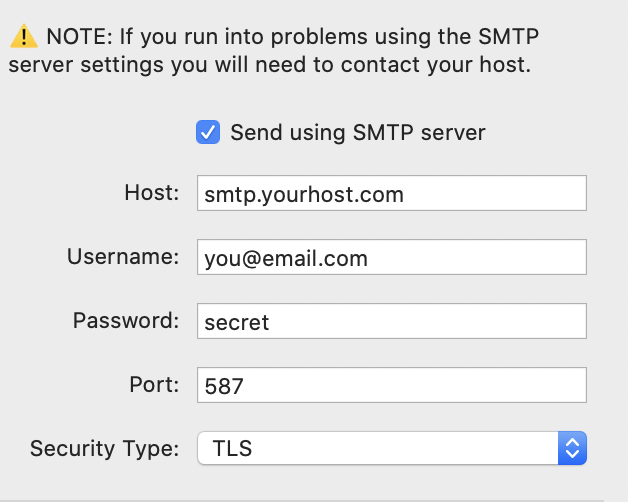 would you mind emailing me your rw8 file?

that’s really strange about the contact form from foundry

i live about 15 miles from the old healthkit factory in Gloucester, UK.

While all say the email has been sent, it doesn’t seem to be the case. I received none of my test messages.

Well that was interesting. I had a look on my server and the page for the foundry form was giving a php parse error on the $human test. It wrote the error log to the directory of the page if you want to view it. The $human cannot be empty so adjusting index.php to expect a score of 5 and the form works. Tells me if it sent it fine. I called the new file index-2.php if you want to try from your end.

So we can conclude that the files your are creating in RW8 and uploading to a server do actually work and say they are sending emails. But not from your server?

Are you able to check in your email server if the forms arrived at your end but were blocked as spam or spoofed emails?

First off I want to thank all those that reached out to help me with a simple problem, that wasn’t so simple.

A special thanks to ‘Nick’ who offered some space on his server to iron things out.

First off, apparently there was an issue with my hosting company. BUT!! As it turned out, there wasn’t one after all with the host’s server.

Apparently, the mail form from within RW8 and the forms stack I used simply didn’t work free standing. I contacted my host server and he said all was fine on his end, the latest PHP was running. All was good. He suggested that I upload a test site. I had to add a subdomain, and named it according. Then I used FTP to send the RW8 files to it. Whoa! Worked fine with one issue. the Foundry stack ‘forms’ didn’t.

As it turned out, that stack didn’t work on Nick’s server either. Nick later found an issue with the index.php in which there was a missing test condition.

Unfortunately I haven’t been able to get the ‘forms’ stack to work with Foundry. An email to them has fallen on deaf ears

So I consider the problem to be 99.4% fixed. I can live without the Foundry form stack, as I have others that work now, including the contact form within RW8

The bottom line as they say?

The forms structure work provided I test within my hosting server. In my house, on my computer, in my environment, the mail out forms didn’t work within RW8 or using Safari. Only after I had them upload to my server’s host did the forms work.

Again, thanks for everyone’s help.

An email to them has fallen on deaf ears

You realise that it was Thanksgiving in the U.S, a big holiday and that many people don’t work or go away for the weekend?

Just to say that the Contact Form page type included with Rapidweaver won’t work with Foundry because it’s (the page type) not Stacks-based.

contact form within RW8 works when I upload to my hosting site. Yes, I know it’s not a ‘stack’

the foundry ‘forms’ stack doesn’t work for me no matter what I did. I moved on to one by Doobox.

Sure I do. I sent the email early friday morning (about 4am) so there was plenty of time even for an auto response.

You’re presumably not using the Foundry theme with the Contact Form page type then?

@qrper Dude it’s a long holiday weekend: Thursday through Sunday. Tamp down on your unrealistic expectations.

the foundry stack and then placed the ‘form’ stack inside. It simply won’t work. Doesn’t send any errors, it doesn’t do anything. Not to worry I’m using a stack from Doobox that works fine.

Yeah, we’re at cross purposes here. Not to worry. You’ve got the form working, that’s the main thing.

I said I haven’t received a reply from Foundry yet. I stated a fact, that’ all.

I sent an email to Doobox and received a reply on friday.

First off, apparently there was an issue with my hosting company. BUT!! As it turned out, there wasn’t one after all with the host’s server.

That makes no sense at all???

Apparently, the mail form from within RW8 and the forms stack I used simply didn’t work free standing.

If I understand what you are saying, you didn’t publish the site to a server? What exactly did you do? IT sounds like once you published it worked? Other people read these posts to solve similar problems.

I tested it locally using safai from the pull down menu within RW8 (on the menu bar on the mac) OR I used the monitor/inspect feature of RW.

I didn’t want to take down my live site, I sell custom made electronic pieces parts for upgrading old radio equipment, and upload the new site I was working on. So, all the testing was done locally, and not on the server.

And yes! Once uploaded into my test domain, everything worked with the exception of the Foundry ‘form’ stack.