A client has just asked me if I can add a 3D image taken with an iPhone 13? The format is .gltf.

I have never heard of this. Is there a way to add a .gltf. image to my RW site?

Not a stack, but it looks like you can do it yourself. 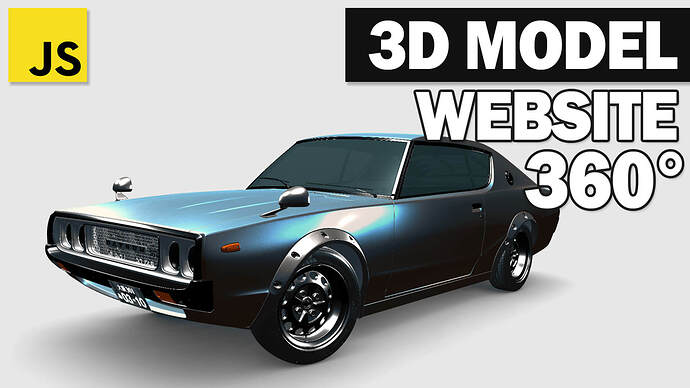 In this tutorial, we’re going to show you how to put a 3D model on your website with 360 degrees viewer using Three.js and JavaScript in just a few minutes. The Model First of all,....

Thanks robbeattie. Sadlly Im having no luck.
Anyone know another way !?

Even they admit that does not work…errors in code.

Hummmm. I wonder if there will be more demand for it when more people have the iPhone 13.

I guess I should say NO to my client for now

Now with the iPhone 13 and others coming out using that format…
Maybe one of the developers i.e @joeworkman or @willwood would get working on a stack for it…Please!!!

I’ve never heard of glTF format. I know of people involved in 3D rendering and animations, but I’ve not heard anything about glTF or using it in websites.

As of October 2021, it doesn’t even feature on https://caniuse.com/ so it must be an extremely rare format.

If someone is willing to buy me an iPhone 13, then sure, I’ll consider looking at making you a glTF stack!

We can all work on that…

Is there any sort of 3D image stack thing that I could offer?

@Figo Well, a while ago, maybe 6-8 years ago, a RapidWeaver user came to me and they wanted a 3D viewer put on their website. I vaguely recall it was an electrical engineering company that wanted to show a 360º of their new control products.

They’d spent a fortune having a SWF Flash viewer built - which obviously was not responsive and failed miserably on tablet / mobile. This Flash solution was pretty-much obsolete before they had even published the website! And even on desktop, a lot of people couldn’t understand how it worked and complained it was failing.

In the end, I remember I just set up this image viewer for them:
http://www.woollymittens.nl/default.php?url=useful-viewer

(The first example, with the thumbnails underneath).

It was a big departure away from what they had originally planned. However, everybody to the website could use it. Plus it still met the objective of being able to view a product from every sideways angle. I think they just did separate photographs for the top and bottom views.

I can’t show you a working example, because this company later got taken over by Siemens (a big company in Germany).

The key here might be to keep it simple. Just a series of photographs that the user can easily click to navigate at their own pace.

On another website I did more recently, the product being sold was hand embroidered / crocheted mobiles to hang for decoration. For that one, I just hung them up on a tree outside, waited for the wind to blow them, filmed it, and published them as little video clips to YouTube.

I did a simple offsite for 3d…
http://www.ibize.com/offsite/Showroom/
I don’t know what player they are using.

If you want a 360 degree product walk-around I used Joe Workmans 360 degree stack successfully a few years back: 360 Degree Stack for RapidWeaver. It wont work with the image your client is offering but worth remembering

I think we’re talking about different things here. The OP was looking to use the glTF format(3D) on a website.

I’m no graphics guy, but my understanding of the glTF format is that it would require a loader.

There are several open-source WebGL engines based loaders available including PlayCanvas, Babylon.js, and Three.js.

Now I have no idea what stacks if any are available to use them, and even if there are any, would they work with the glTF format.

As I said I’m not at all a graphics person, but the glTF 2.0 format appears to be coming a very popular format. Microsoft is using it as the 3D asset format across their product line (Microsoft Office included). It also has wide support from modeling software like Sketchfab and AutoDesk.

So there might be a market for a stack developer to consider.