Modal Overlay for a mobile Navigation

Are you using Foundry?

Based on previous form, I realise you will most likely ignore this, but on desktop, your login popup is sitting behind the menu popup, so gives the impression it’s not accessible. 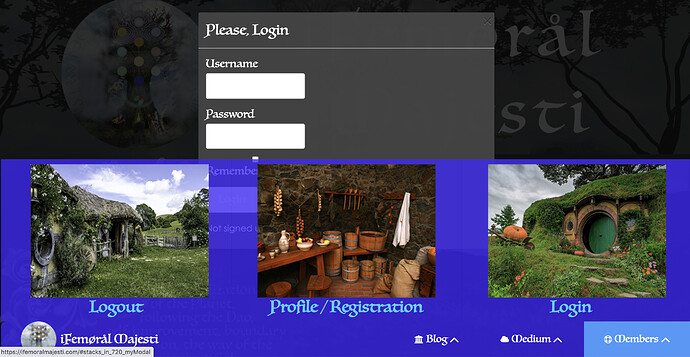 I realise that once you move the mouse off the menu popup, said popup goes away so making the whole login box visible, but this is very bad from a UX POI and you should be focusing on fixing that issue, IMO.

Your desktop menu is also crashing the sides of the screen at various widths, most noticeably iPad.

As I’ve comment before, and above, the site is breaking some major UI and UX rules and as such your users are going to be impacted.

The page is also still massive, in terms of download speed, it’s nearly 17mb. Page loads speeds are dreadful. Again, this has been pointed out to you many times before.

I can’t speak for others and do realise you have not asked for my input, but I can’t help but feel you are losing helpers on this project by consistently ignoring collective suggestions to improve the site, instead, moving on to another problem and requesting help again, which as I say at the top, will most likely get ignored.

For what it’s worth, the site is now littered with major performance issues, and you need to go back to the start and deal with each issue already present, not adding new elements which create more.

All only IMO, and you are welcome to ignore me, I’m not trying to be a dick, but perhaps trying to get you to wake up and smell the coffee, so to speak.

Yeah you have an issue with the menu. On my iPhone, it reduces the menu to circle icon with a plus sign and clicking on that and selecting members only takes me to the login page. No option for members/registration or logout.

On the desktop and iPads, the pop up menu with the images means half the screen is lost to a large blue bar and even worse if I click on “Profile/Registration” it appears under the menu and at that point I would have expected the menu to auto hide but it doesn’t. With the menu still open I then click on “Login” and that window slides in under the “Profile/Registration” window.

Perhaps start with a menu that opens on a click rather than hover? Reduce the picture size in the menu to stamp size or remove them completely.

Images very large and takes an age on all devices. Personally I would start with a clean and simple front page that can draw you into the rest of your website so lose the images slider or just rotate a handful of images to keep your load times fast.

thanks for your suggestions.

I shall continue to read your posts with amusement, but ensure I don’t comment or harass you further.

He was far from harassing you @pacman7293. In fact @TemplateRepo, among many others have tried many times to give you constructive advice on both design as a whole as well as technical issues you’ve faced and written about.

You have asked for advice, in case you’ve forgotten:

Any suggestions on my site General

Hi I was just wondering if anyone had any suggestions on my site: Only thing I wanted to do was to get that impact slide show not to overlap the stuff above and below it (site title and the blog module below) at certain widths… one was saying the images are too big… i tired squashing them… any other suggestions appreciated… thanx & happy new year

On that very thread @TemplateRepo and others attempted to help you, and again are doing so here in this thread as you’re asking for help again. Time and again you’ve ignored his, and others’ advice both here and on the Elixir forum. If you don’t want their advice then don’t post on public forums asking for advice or help. And to be clear their advice has been very kindly offered and that advice has been quite good. I would expect that someone who has asked so many questions and gotten some really good replies would be a little less rude and a lot more appreciate of their feedback and help.

All you do with posts like this is to alienate people and force them to not offer their help and advice.

Looks like you are the person giving rants not receiving them.

Most of the folks on this forum are volunteers who offer you help on their own time. If you want official technical support then get off this forum and contact RealMac and wait for a reply.

No one has “harassed” you or “ranted” on this post.

You’re also the one who is asking for help, and if you can’t take the advice of someone who is much more experienced then you are, don’t ask questions.

I wouldn’t bother replying to this person he/she is a troll looking for a reaction.

Posts repeatably asking for advice on public forums and then claims “harassment” when given valid constructive feedback.

Nobody has answered my question about what I asked. Which was a nav bar.
Instead you’re making personal attacks and talking about other threads, of which your club also acted rudely.

Your question is irrelevant at this point. You need to correct the issues that have been pointed out above before moving on to the your current issue. You do not seem or want To accept that reality.

I was thinking about your NavBar question before going to bed last night and came to the conclusion that on the mobile device, I would turn the Navbar off for the front page and have a set of three buttons for your login, register and blog links.

Once the user has negotiated those buttons, you can use the NAV bar on lower pages to display all your other pages.

Much as I like the use of “Modal” windows siding into the screen, they are to be honest totally useless on a mobile device. Creates confusion for the user and pop up windows can be just as bad. Newspaper websites such as the Telegraph in the UK is a bad avert for these things which is why I use PiHole to block all adverts. That gets rid of a lot of dross on NewSites that clog up the screen and actually get in the way of the news article.

I love the simple beauty of RW giving me the ability to turn features on and off depending on if the viewer is a desktop, tablet or mobile. The buttons could be hidden for tablet and desktop viewers and vice versa for mobile viewers.