Can text be made larger when editing text stack text?

Is there some setting to increase the size of text while editing? Maybe a zoom setting? When I click into a text stack to edit, the text shrinks to a small default size. I’m not sure why that happens, but it does, and it’s hard for my old eyes to see.

With the text that you want to enlarge selected (click and drag) either Cmnd + or Format > Bigger.

Mark,
That does work, but it also changes the text size in Preview mode, and that doesn’t make any sense to me why that happens. Here shows what happens when I change the “Thrifty Cabinets are built to order with a 50% down payment. Orders can be placed by phone or by using the “Contact” page” text.

Before I command + the text in edit mode it looks like this:

After I command + the text in edit mode it looks like this:

I’m sorry if I misunderstood what you need.

If you just want to make it bigger to read in edit temporarily, have you tried scroll zooming your entire screen?

Thanks @MarkSealey. Scroll Zooming with these options seems to be a good solution for my “old” eyes. 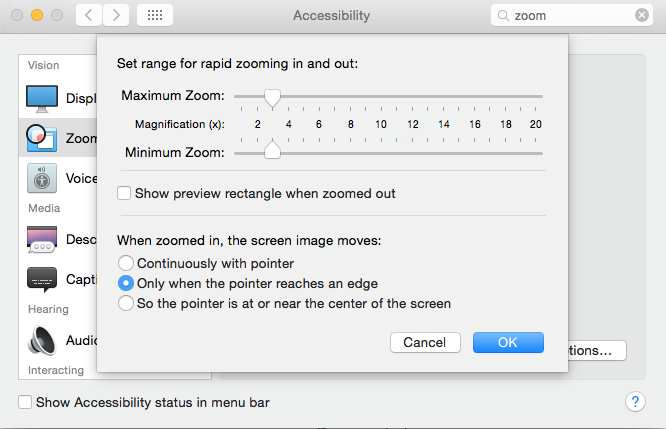 same question here. is there any other solution by now? stacks 4? some way to set the text in the edit window (text stack) to larger? thanks, ruby
15days later. anyone? please?