Due to various computer problems, I lost my Rapidweaver projects on my computer.
Completely.
Including Rapidweaver itself.
Now all going again, except all I have of the original web site is the files downloaded from the server.
Is there some way of importing everything to re-establish a Rapidweaver project?

All help much appreciated.
Ron

Backing up is an essential way to go. Did you know that you could back up your project file on your hosting server? I guess not…

You can set it up in your project’s ‘Publishing’ settings. 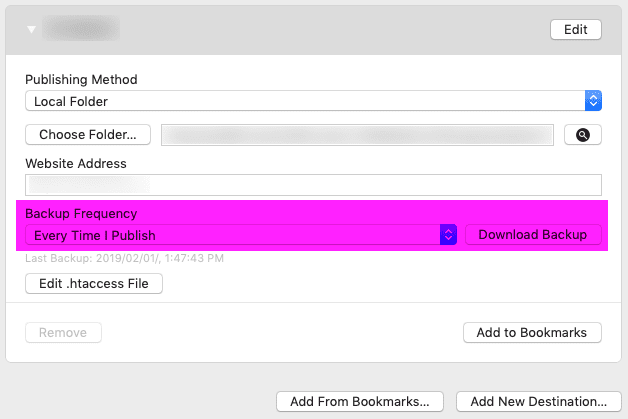 That’s just one way to back up. There are lots of other ways.

RapidWeaver release notes, including links to download every version of RapidWeaver since 2004.

You’ll need to re-enter the serial number. You can Retrieve that at this page

Support & Help for RapidWeaver and Squash from Realmac Software. Including an in-depth Knowledge Base, Support Forum, and Video Tutorials.

Then you can start rebuilding the site by copying and pasting from the live site.

Lots of work that could have been easy to avoid with a simple backup strategy. Time Machine is included with your macOS and external hard drives are pretty cheap these days.

Thanks Joe.
That’s what I suspected.

Yes, thanks you.
I had the serial number because I still had the original email on the server.
And I’ve downloaded Rapidweaver.
All that was no problem.

I did have Time Machine running and backing up to an external drive.
But that drive crashed, in a BIG way.
And assuming I had that, I had changed to a better Mac, (and rebooted and sold the old one) but then found I couldn’t re-load from the Time Machine drive.

I will, in future, backup to the server.

I know that some swear by Time Machine, but I find it a complicated mess for such an important thing like backing up. I’ve always found it pretty unreliable too. I do use it, but only as a fail-safe, my main backups are done using Superduper, which clones the internal hard drive to an external and makes it bootable. This is handy in the event of a total hard drive failure: You can boot straight to the cloned external and only lose the work done since the last clone backup (in my case, 24hrs) and be back working in a matter of minutes.

For incremental non-destructive backups ( which in theory TM does), I use Syncovery, which is a bit clunky, but solid once setup. I only mention this for some ideas for you going forward, in case you want to look at alternatives.

All I will add is that you should never rely on a single backup, ensure you have at least two, plus ensure you have some sort of off-site backup too, so in the event of theft or fire, you do not lose everything.

Many thanks for all that.
I had heard of SuperDuper but never tried it.
Sounds a very attractive idea, will have a look.
And Syncovery too.

Yeah, you know what they say, a plumber always has the worst plumbing in his house.
Same with me.
No I’m not a plumber, but spent all my working life in electronics and computers, so got very lazy with backups. And was surprised and frustrated when the external hard drive crashed.
Yes, I too have never been that impressed with TM, though have used it to ‘recover’ onto a different computer once, so thought it would do it again.
Hmmm.
Lesson learned.

Now to find a couple, at least, external drives.
Wonder if SSDs would be more reliable.

My experience is that there is no difference between HDD and SSD, although many will argue. The benefit of an SSD though, in terms of Superduper and a clone of the internal, is that if you need to use it, it’s faster.

Yep, and just discovered they are twice the price.

They used to be about ten times the price, so they’re pretty cheap now.

I use one of these from Icy Box. I picked the model with USB C for faster data transfer and just insert my bare HD of choice. I have stacks of HD left over from old PC so just repurpose as backup drives.

Probably the cheapest way if you have the hardware lying around. The box will also clone drives at the press of a button should you require that feature. Fits both 3.5" and 2.5" HD and SSD SATA drives 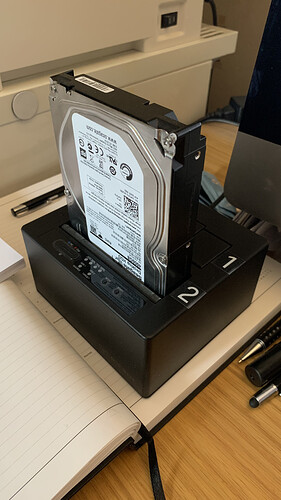 If your external drive crashed during a recovery that’s really bad luck and extremely unlikely to happen.

Plain and simple it doesn’t matter then what software you were using, TimeMachine, SuperDuper, Carbon Copy Cloner, etc, etc, if the drive has a hardware failure the software isn’t going to make any difference.

I run TimeMachine as my primary backup. I own both SuperDuper and Carbon Copy Cloner. Haven’t really used either in a few years. There big advantage was the ability to boot off the backup drive.

TimeMachine doesn’t do the boot thing, and way back when (OSX lion I think) Apple added a recovery partition to the main drive. You can also start a Mac now with recovery mode over the Internet, you can also create a bootable thumb drive.

Yes booting off the internet or even a thumb drive is slow, but they both work, and let’s face it, if you’re at that point it’s disaster mode, time isn’t the primary concern.

I run two TM drives all the time. I also use BackBlaze to keep offsite backups for disaster recovery, if your house or office burns down having twenty backup drives in the same location doesn’t help much.