Hi all!
I am new here and not so clever with RapidWeaver.
I still use the 6.0.6. on my old macbook, and it works fine until I had to move to another provider.
The big question I now have is how I can make the website work on a smartphone?
I have the home page, but that’s it. The menu does not work.
Maybe I need to upgrade? (have a 1 year old mac mini)
Any tips are welcome, thank you!

Not sure exactly what the question is but to work properly on different screen sizes your site needs to be responsive. Suggest you read up on Responsive sites and look for “Responsive” Rapidweaver themes, pluggins, and stacks.

You might also expand your question a bit to explain your question. I assume your side works on phones, but the layout is poor and such. The menu likely does not work because it’s not “responsive” and it can’t fit the screen size. If responsive, on phones it will collapse down into a menu icon.

And welcome to the RW community.

Which theme are you using?

You also may have to check on the PHP version on the server of your new provider.

The menu does not work.

Thanks for your reply!
The url is www.josleys-zonen.net

Thank You for your reply!
On the computer and laptop it works fine.

But you got my question!

I am going to look for that responsive…

Is this what you mean? 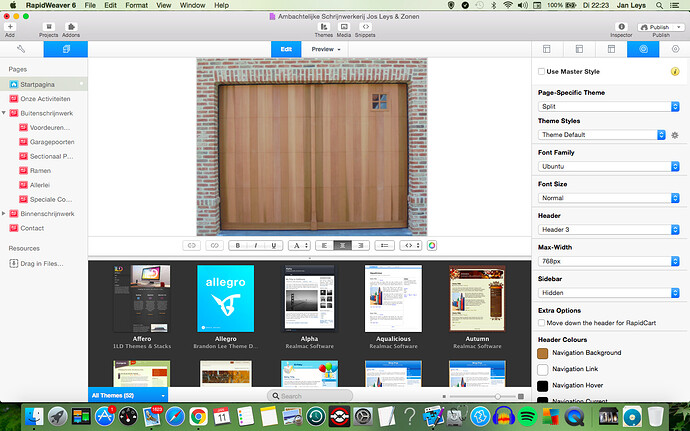 This is the published site now. Needs big update…

The key is to think “phone” first when designing pages with responsive tools. And think “percentage” rather than fixed spacing. For example, a 36 px spacing may be fine on a big screen, but on a phone it’s likely too much. So for responsive work think in percentages. A good responsive stack, for example, will allow you to express margins, padding, etc by percentage as well as fixed values. That’s just an example. You’ll have to learn to think how things work big and small!

I think you are referring to the Mobile Hamburger menu not working?

Your site is getting an error message in the Web Inspector which might be the problem:

Try re-publishing all files in RW.

I think you are referring to the Mobile Hamburger menu not working?

Yes that is what I mean!
Ok I found the rw_common map. What to do? Delete all files from the server and upload all again?

I have to read this a few times…

I really have to learn allot…

No need to delete any files just yet, just choose Re-Publish All Files from the RW menu.

Re-Publishing has no effect.

The theme you are using appears to have mixed content.
Your old provider probably was running your site under http. You now have added SSL to your site and are using https as the protocol and are forcing visitors to use https.

Mixed content for both the jQuery library and the Google fonts is being blocked because it’s referenced with http as the protocol.

The Split theme in the current version of RapidWeaver (came with RW7) has fixed the jQuery issue. jQuery is needed. to open the hamburger menu with Split.

Since you are still using RW6 (I don’t have that anymore)you can try to find another theme that works. Contact the theme developer for an update, or fix the theme yourself.

You could also try to add this to the head section of the project file.

I don’t remember where you add custom code in RW6.

The Google fonts is not in the latest release of Split, so I’m guessing that might be something you added?

Thanks for your reply and effort!

My plan was/is to get this site work. So I can build a new one with the current RW.
If I leave this like it is, and I build a new one. Should this solve these problems and what are the main things I have to think about to avoid situations like these?

I’m not sure what you’re asking here.

The current release RW8.9.3 (November 2021) is two full releases above what you are using, so there’s quite a bit that has changed.

It looks like you are using the split theme. If I remember that came with RW7, so I’m guessing that you purchased the theme from the developer? If not then I’m not sure where it came from.

My memory might be wrong here, perhaps split came with RW6. The split theme that’s included with RW8s current version has had the jQuery fixed. That’s where I got the line of code above.

As for the Google font, that’s not in the current version, so I’m guessing that you added that. If so change the http to https, and the font should start working.

As I mentioned before, what caused the problem to suddenly present itself, was switching to HTTPS. Now that’s a good thing, as all current browsers will warn users that your site is insecure without that. But, in your case, switching to HTTPS broke the site.

Now, will upgrading to the latest release of Rapidweaver fix the jquery problem? I would think so, but that’s a pretty big jump (two major releases) so you might bump into some other issues. Since you are going to do it anyway, then you might go ahead and purchase the upgrade. You can run both RW6 and RW8 on the same Mac, the old project files would get converted when you open them in RW8, but the old RW6 files should still be untouched and available to use with RW6.
You can also try to update the RW6 to the last version of RW6 by grabbing it here.

RapidWeaver release notes, including links to download every version of RapidWeaver since 2004.