This new version of Stacks has a number of speed improvements extensively using a new template compiler that speeds up HTML/CSS/JS template generation by as much as 10x. These changes are underneath the covers to Stacks so you won’t notice them except when things are a bit snappier.

The next time you launch RapidWeaver you should see an update for Stacks v4.1
If you need to you can download here and install by hand. But make sure to remove any old versions.

And it goes without saying, but backups are always a good thing whenever you make a big transition.

Stacks v4.0 introduced the new compiled template rendering engine, but it was only used in edit-mode, only for HTML templates, and in limited ways.

Stacks v4.1 expands the use of the new rendering engine to work with all template types in all modes.

The new rendering engine is an opt-in process for stack developers. Opting in or opting out allows stack developers to take the time they need to migrate to the new rendering engine while minimizing inconvenience to users. All old stacks that can’t immediately use the new engine can make the necessary changes slowly. Over the next year we’ll help developers ensure that every stack is migrated and then phase out the old engine.

There are now almost 2500 stacks (counting all the sub-stacks of the many frameworks available). We’ve been testing Stacks v4.1 with developers for over six months to ensure maximum compatibility. We’ll be honest here: any release this huge can’t be 100% perfect. But after six months of testing we believe most stacks work with our new engine – and many are much much faster!

You don’t need to do anything to see the new changes. Just update to Stacks v4.1 and you’re all set. Open your project and enjoy much faster preview and publish.

This new version of Stacks works great on Big Sur (as do all the rest of our plugins) – but we’ve had a bit of slow start while working on Apple Silicon. Our Apple Silicon dev machine is currently a very shiny, very beautiful… brick. After trying to update it to the latest Big Sur releases about six weeks ago it stopped working. We’ve been working with Apple to resolve it, but no luck so far.
But if I have to I’m going to run out and buy a new MacBook Air (LOL. It’s a good excuse to buy a fast little computer!!!

Hi Isaiah,
after doing the update, (also manually), and restart my Mac, it still appears as 4.0.0.

then i think the place you’re installing Stacks is not the right place. It sounds like there are multiple addon directories to me.

you should use RW to open the add-ons folder (in the View menu) in that folder you’ll find the old copy of Stacks. dump that one in the trash and manually drag the new one in. then re-launch RW.

Hi Isaiah,
I manually downloaded Stacks 4.1 and put it on the desktop. The info correctly says that it is version 4.1
So I opened and saw Package Contents, I went to the Resources folder and opened the Stacks folder, checked the version of each one of them. In all version 4.0.0 appears. 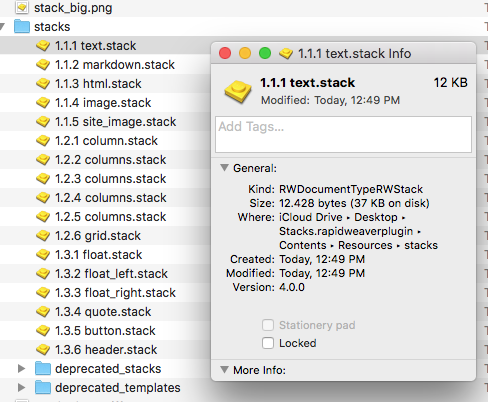 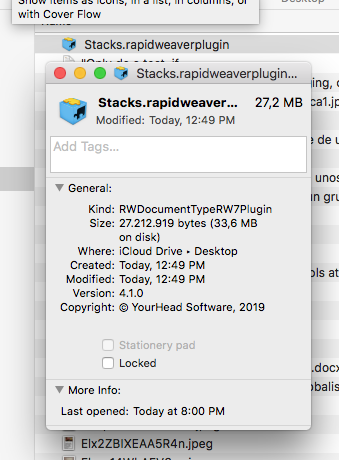 traditionally I’ve left the version numbers of these stacks alone as Stacks increments it’s own version.

this is because these internal components really don’t change much except during the major version updates.

but I will consider updating or perhaps not displaying their numbers as I can see how it’s a little confusing.

but the version number of Stacks – the plugin software displaying this library – it’s always visible in the upper right corner of the edit-mode layout.

Are you sure about that?

Thank you Jannis - 8.03 has worked well for me up till now. I’ve just updated to the latest RW and all is well.

I have some debug information in section stacks (all others look okay, I guess), is this something I have to address to @isaiah or @Elixir ?

One more thing:
Update to Stacks 4.1
Got a update for a stack (Foundry).
Update was loaded, RW crashes (App closes, no crash report)

This is on me. I left two child stacks within Sections as .devstacks in my haste to get it published. It will be changed in the next update.

Hi Isaiah,
I had overlooked checking the upper right corner. Thanks for pointing out.

@dripple - debug info is for developers there are two ways to enable it (and so two things to check when you’d like it to go away).

Either Stacks has developer options enabled in the Preferences or a Developer accidentally shipped a stack in developer mode.

Developers should never ship a stack in developer mode, but accidents happen. You should let the developer know (nicely) and they can correct it when the send out their next update.

However, it’s a good idea to disable developer mode immediately. Developer mode slows everything down to collect data. Not a lot, but on a complex page it can make a big difference.

Here’s how to disable these things…

Developers can enable developer mode of a specific stack. They do this to see the metrics, but also to enable live-reloading of that stack when any file inside the stack changes. This allows developers to edit the templates within a stack and see changes immediately.

Every stack with the file-extension of .devstack is loaded in developer mode.

To disable:
We just need to locate the stack in the finder and change the file extension back to .stack – what it should be.

Developers can enable the rendering metrics on every selected stack. This helps them compare two stacks or two versions of a stack to help optimize template rendering time.

Either Stacks has developer options enabled in the Preferences or a Developer accidentally shipped a stack in developer mode.

Developers should never ship a stack in developer mode, but accidents happen. You should let the developer know (nicely) and they can correct it when the send out their next update.

As noted above this one was on me, and has already had an update issued for it.

Thanks @isaiah, already did that the other day for my own installation as i have some sites who use sections a lot and @Elixir shipped an update.

PS: I have a feature request: a navigator panel / tree for a stacks page

Hi there,
whooow, such a week with a lot of updates - thanks all. I haven’t had a chance to read and try out all the changes yet, but so far it’s running stable for me;-)
However, I have noticed only one conspicuousness. The arrangement of the stacks changes with a single or double click. Not always, but very annoying, because not predictable. Pls. hav’a look @isaiah and @Elixir - I’ve done a little clip. (1 MB - sec. 00:12 and 00:31)
Best Roger

That’s a common feature request. And I think it’s on my short list for Stacks 5.

Curious. Are you using a Mighty Mouse?