I’ve been working on a new UIkit3 template, almost ready to go, working on the contact page. Been saving regularly, then the dreaded RW crash. Not a bother, saved a few mins ago. Reboot… ARGH!

The project loads fine, but the page that RW crashed on won’t load into edit mode, it just sits there, can’t add anything to the page, nothing. See image…

Hit preview and all I get is (null)(null). See image… 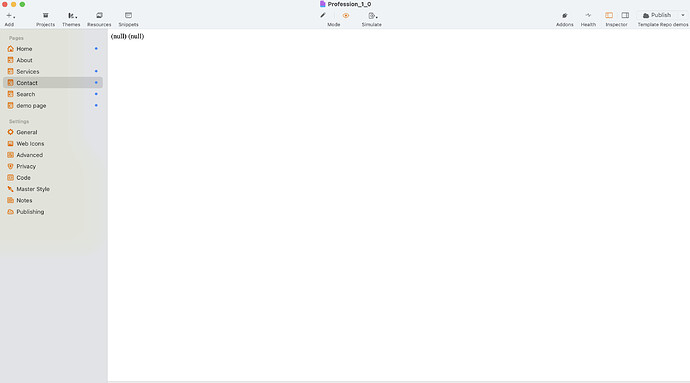 Rebooted etc. Nothing is working.

I’ve published the page, but the work I’ve done today isn’t there. RW is not publishing the page, the server is still showing the version last published yesterday. It’s as if the page no longer exists to RW.

I’ve never seen this before, but have had other issues of a similar magnitude, and I’ve just rebuilt the page. But, this page is has taken five hours to do, as it’s really complex with a load of custom css. I’m not even sure if I could make it again as it took ages to work out the css!

Before I give up, has anyone had similar or seen the (null)(null) thing before, and got a fix?

Tagging @isaiah in case he’s seen this one before.

I’ve managed to get the page published…

I have actually been able to replicate the crash and the subsequent behaviour. I’ve saved the crash report.

steve b sent you 1 item

Could you send it to @dan

Good call, should have tagged him too.

I’m working through things with a clear head this morning and I’m actually beginning to think it’s one of those rare instances where one issue started, I didn’t spot it, then it got compounded with more, and eventually it all went a bit Pete Tong.

I say this, as it appears that the save command (done via keyboard shortcut) stopped working about an hour or two before the crash. I think this because when I checked my backups today, there isn’t anything changes made to the page in the last couple of hours working.

I’m putting this down to “just one of those things” and starting to rebuild the page in question. I have sent a message to Isaiah on Slack, in case it’s S4 related and of any use to him, and maybe @dan can get a look at the crash report above, but otherwise, from my end, I’m moving on and just rebuilding.

Last night, in the thick of it, this of course seemed like the end of the world, but this morning, it’s no biggie. It’s a pain, and if the report can pickup a deeper issue then great, but otherwise, I’m over it.

i’ve seen the crash report and it seems at least to be triggered by stacks – although possibly may involve markdown libraries.

in any case, i’m looking at this in a private thread on slack. i’m not sure that there’s anything much non-developers can do but commiserate.

from the looks of the stack track it looks pretty unique. it seems unlikely that there are going to be other users that have seen the same crash. any similarities are probably just coincidental.

after some research it was determined that at least one crash was caused by the Boost stack from 1LD – it uses some unique CSS to speed up edit mode by forcing a lot of rendering onto the graphics card. this mostly results in greatly increased performance for scrolling in edit mode, which is very nice. however there is a reason that everyone isn’t doing this all the time, of course.

in complex pages on graphics cards with limited resources it can cause webkit to do some very strange things – including crashing. (i’ve also seen upside down graphics, no graphics, and kernel panics too)

but, there was also a page that failed to load. i don’t know if the load failure was due to the boost crash or vice versa. or if the two were unrelated.

they both occurred on the same page, so it seems likely that it was more than coincidence, but there isn’t any obvious chain of events that leads from one problem to the other.

the load failure seems strictly related to RW v8.7. when the project is opened in RW 8.8+ it seems to work fine. on RW 8.7 the stacks plugin loads, other pages load, but this particular page never receives the message to load the page. the result is a very blank page.

so… the takeaway is: try the latest version, you never know it might have fixed the issue. and be wary of add-ons that boost speed radically, they might have some side effects, especially when running on hardware with limited graphics like a macbook air or mac mini.