Hello all. Yesterday a new N1 iMac arrived and I set it up from a Time Machine backup of my MBP. Everything went nearly flawlessly with the exception of RW. Specifically, when I open my company project file on the new iMac, I get one and sometimes two “Missing - SiteMap Plus Plugin” pop-ups. I have checked my Add-Ons folder and I do see the SitMap plugin in there… 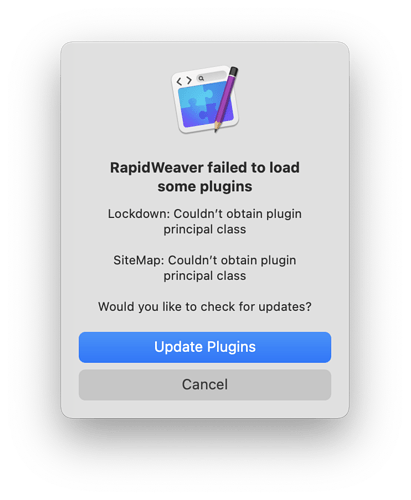 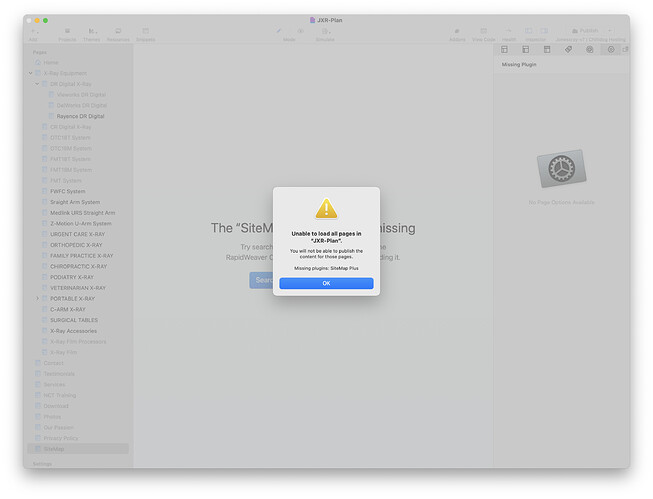 https://www.yourhead.com/sitemap
you have to upgrade

If updateing doesn’t work you might have to run RapidWeaver under Rosetta until the plugins have a build for the m1 chip:
M1 Based Macs and RapidWeaver | RapidWeaver knowledge base (realmacsoftware.com)

Doug, you were indeed correct. I tried re-downloading the SiteMap plugin from YourHead but that didn’t work…

As soon as I turned on Rosetta - it works.

@isaiah, is working on builds for these, but don’t know the ETA.

I have been getting “similar” popups on RW 8x for awhile on macOS 10.15.5, but I’ve just always clicked on Update Plugins, but no plugins ever update so I’ve just accepted this as part of the RapidWeaver startup process. 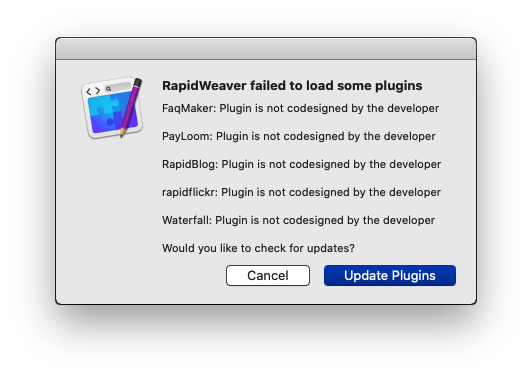 But it does get kind of old, especially since (I think) the list got longer after I updated to 8.9.1. However, my popup says “not codesigned by the developer.” I don’t even know what that means.

Finally, today (without even reading this thread), I decided to ask here on the RW Forum how to eliminate this popup, thus the screenshot. Then it occurred to me to just move these plugins into the Disabled Plugins folder, but these plugins weren’t even listed in the RW8 Addons folder.

They were actually in the RW7 folder so I moved them to the RW8 Disabled Plugins folder, though that might have been the wrong thing to do, and please somebody (like @teefers) let me know if it was wrong.

I then restarted RapidWeaver 8.9.1, and the most amazing thing happened: It restarted (at least) 2x faster, no more Update Plugins window, just automatically opens the RW Project I’m working on, and RW itself operates at least 2x faster.

Not sure why that would have impacted RW8 starting.

Looking at the screenshot, I don’t think any of those listed have support for some time. That’s why the “Update” button didn’t work. So you could have just deleted them instead of moving them to disabled folder.

“not codesigned by the developer.” I don’t even know what that means.

You can thank Apple for that message. Starting with Catalina, Apple requires anything that “runs” on your Mac to be signed by an approved developer. even stuff like this that was on your Mac long before Catalina.

IMO this is just part of Apple locking the Mac down. I wouldn’t be surprised if in a future release you won’t be able to run anything on your Mac that doesn’t come from the App store (Like iOS and iPadOS are today).

I am using an M1 and I have enabled Rosetta. I am still getting an error even after I have downloaded the latest version of SiteMap. My RapidWeaver version is Version 8.9.2 (20886) 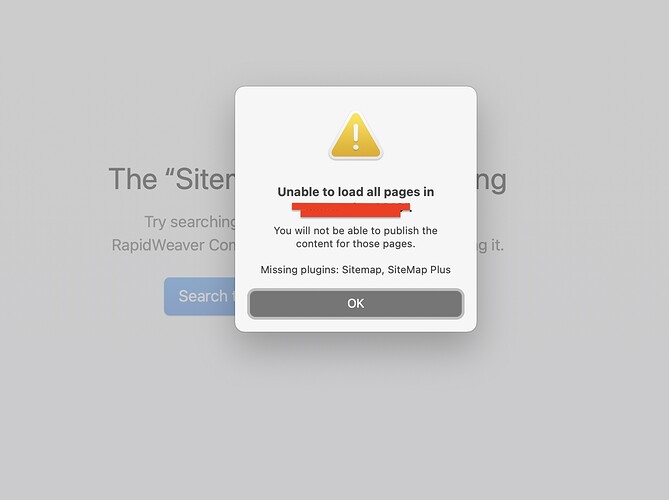 This sounds like a job for @isaiah. Perhaps he can shed some light on things or offer us some insight on how you can resolve this.

Still waiting fr support. I am a big user of the products. I upgraded Stacks yesterday. @isaiah ?

Urgently need this resolved. Is there a preference file I can whack?

Are you using sitemap plus on the “Urgent” project? You could go into addons manager and disable that plugin.

You could also go into the addons folder and delete it as well.

Not sure why you’re having trouble. Others M1 users are using it fine with the latest release running under Rosetta.

Thank you, @teefers . I have had a ticket open with YourHead for over 3 days and have yet to get a response.
I appreciate you trying to help.

It’s not in the AddOns folder in RW. It installs just fine but RW can’t find it when it launches.

It sounds like it may be installing it to the wrong add-ons folder. You may want to try manually installing the plugin. Open RW and select ‘Reveal Addons Folder’ form the RW8 menu. Place the SiteMap.rapidweaverplugin file into that folder. Relaunch RW.

Thanks, @DLH
I did indeed check this, manually removing any old instance of SiteMap, re-installing from a fresh download and making sure it appeared in teh folder. Additionally, I made sure that RW was using Rosetta by specifying in the RW “Get Info” window of the app.

YourHead software, where are you???

It seems @isaiah is MIA again.

re-installing from a fresh download and making sure it appeared in teh folder. Additionally, I made sure that RW was using Rosetta by specifying in the RW “Get Info” window of the app.

If you are entirely sure that the plugin is in the add-ons folder that RapidWeaver is pointing to, and you are getting the missing plugin message. That might be a question for RealMac. @dan, @tpbradley, @Aaron

It would be RapidWeaver not finding the plugin, not the plugin.

We have a few different messages on this post. Some from the original poster, others from you and others.

Here’s my understanding of the messages.

Both of these will prevent the plugin from loading.

@JohnSnow, I did notice that the message on the screenshot you posted listed two plugins missing. Sitemap and sitemap plus. Not sure why it shows two missing.

Looks like this may be the issue. Multiple Application Support folders for RW. How do I make this right?

I personally don’t use the built-in addons folder location. I set mine up as a subdirectory of the documents folder. I just called it rapidweaver-addons.

In the addons manager in RapidWeaver down at the bottom, there is a button to set the location. (on an iPad now so can’t give you a screenshot).

There’s also a reveal in finder button. That’s where Rapidweaver is trying to load the plugins and where stacks looks for 3rd party stacks. So if you don’t want to move the add-ons folder to a new location that’s where you need to make sure the addons are located.

If you do this, it should solve the problem. There has been an issue installing addons (plugins, stacks, and themes) by “double-clicking” on Macs that have had multiple versions of RW on them.

I always either right-click and select open with > Rapidweaver8 or drag the addon onto the running Rapidweaver8 icon on the dock. That seems to work every time.

With the help of you offering suggestions and exploring all possibilities, I found the issue. In every case, the plugin was behaving and it was located and loading properly. What killed it for me was the following and must have been a holdover from the Loghound days in my setup: 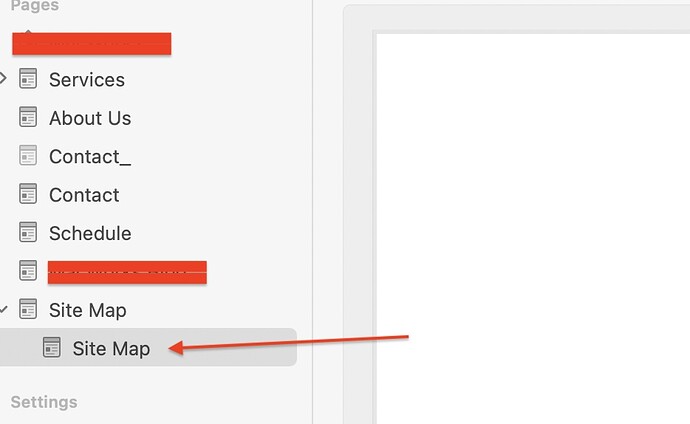 Once I removed the indented page, it started to work. Go figure.