Just added the new events for year 2020 in Kalendar. Now after uploading all my events won’t be displayed (the new and the old ones). There is no colored dot in the month view and if I click a certain day (where I know an event occurs) nothing happens.
I am using RW version 8.7 and the Kalendar stack from Weavium is version 2.4.3.
Can anyone help?

Have you cleared your browser’s cache and looked at the page again?

If you can give us a URL and tell us a date where there should be an event, we can check to see if it’s being displayed.

yes, that’s what I have already done (clear the browsers cache). I am using the Kalendar stack on the following (german) website:

No I’m not seeing anything on those dates but there’s something else strange going on - when you click the Next Month > arrow, the calendar shifts but the Month label at the top stays as DECEMBER 2020.

thanx @robbeattie, at least the ‘strange’ behaviour is the same

I have sent them an email a week ago but haven’t received an answer yet.

The last time @weavium was on this forum was September 6th. A few other users also say they have sent in support requests and not heard back.

Not sure what that means, but don’t hold your breath.

I raised a support request with them a week or two ago, got a fast reply and a fix within days.

I may be wrong, but I get the feeling they respond to “bugs” etc. but not when it’s a user error or an issue outside their control.

Was the stack working previously for you?

yes it worked well when I have bought the stack last year and entered the events for the year 2020. Two weeks ago I ‘just’ added more events to the stack. BUT in the meantime there were updates for the stack itself and for RW.
Checking their changelog up to 2.4.3 of Kalendar shows that there were problems exactly with the display of events.
All I have done was to update all my software as advised by the developers. That’s my fault…

when @robbeattie mentioned Month label didn’t shift correct I checked it too on my website https://mc-wyland.ch and I found that the blue category named “Ausstellungen” displayed the events (e.g. in March 2021 and in May 2021) as expected.
The difference between this categories (or calendar within the Kalendar stack) is that the events in the blue category are set as “All day events” whereas the green category is using a time range on a particular date. Changing the first three events in 2021 to All day events let the events show up on the website.
Strange, and I believe that is not a user error as @TemplateRepo assumes.

Strange, and I believe that is not a user error as @TemplateRepo assumes.

No, I didn’t assume that, and I’m sorry if that is how it sounded. I just gave my opinion on how I think the dev handles support requests.

when it’s a user error or an issue outside their control.

I suspect in your case it’s the latter, as in something outside their control, as in Google.

I have a demo of Kalendar running here: https://www.caffeineinjection.com/elements/Calendar/

I’ve just added a one-off timed event or today, called “Test Timed Event” to the Google calendar, and it’s appeared in the demo of Kalendar as expected.

I’ve also added a one-off all day event for tomorrow called “Test All Day Event”, this has also appeared.

I think this means, for me, it’s working as expected. If there is something else you’d like me to test do let me know. I’m just trying to help you, not blame you.

I totally agree with you @TemplateRepo there is for sure a combination of Kalendar together with an outside component that causes this issue.
I have just checke your page and as you mentioned there are two test events on that calendar (the one one the top).
But playing around shows something strange. I skip to January 2021: no entries there, then I am switching back to December 2020 and now there are plenty of events showing up. Yes on the 23rd there is still the test event but there is another event listet also.
This seems strange to me, at least I wouldn’t have expected that.
Wich versions do you work with?

Since I can see my issue even in the RW preview and in the simulator, I assume that the cause won’t be related to the Mac OS nor to the website settings.
I will start with a fresh website project and try to find out more.

But playing around shows something strange. I skip to January 2021: no entries there

I don’t follow. On my demo all my recurring events appear in Jan 2021 and beyond. 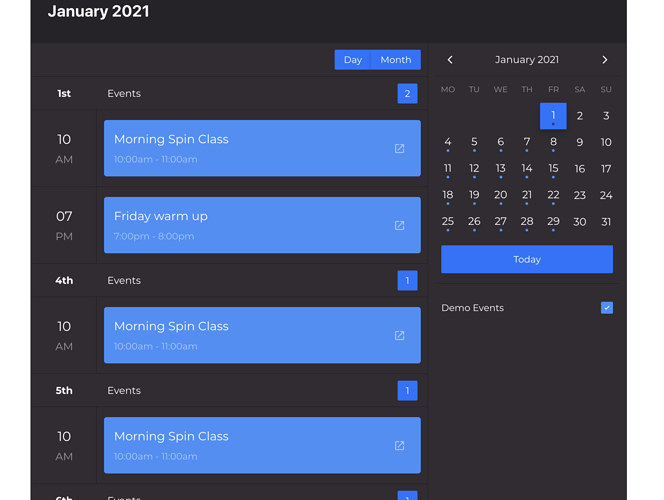 Are you saying that in my demo you can’t see those evens in Jan 2021?

yep, this is how it looks on my side: 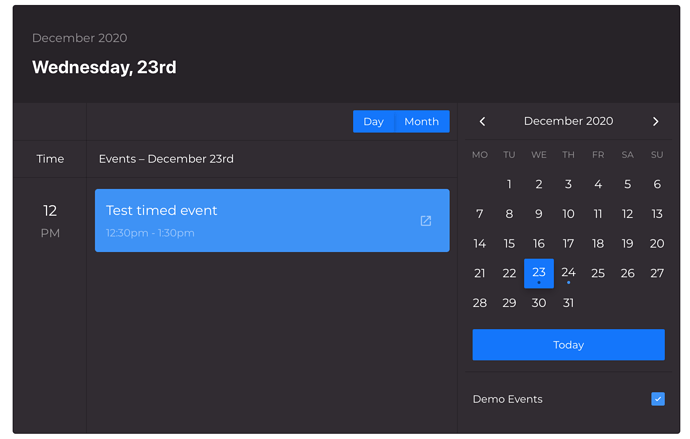 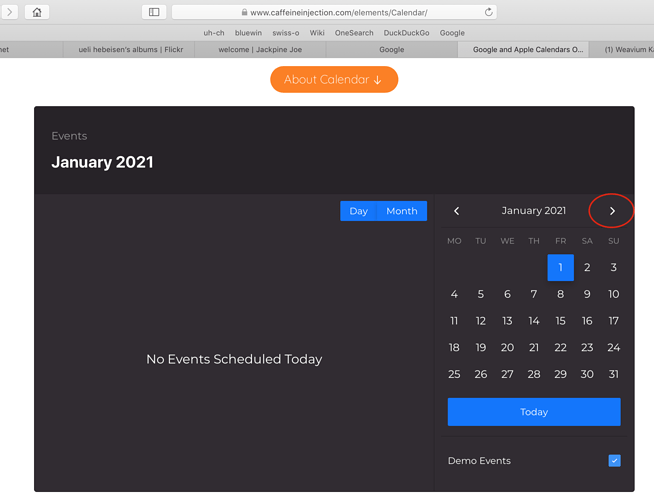 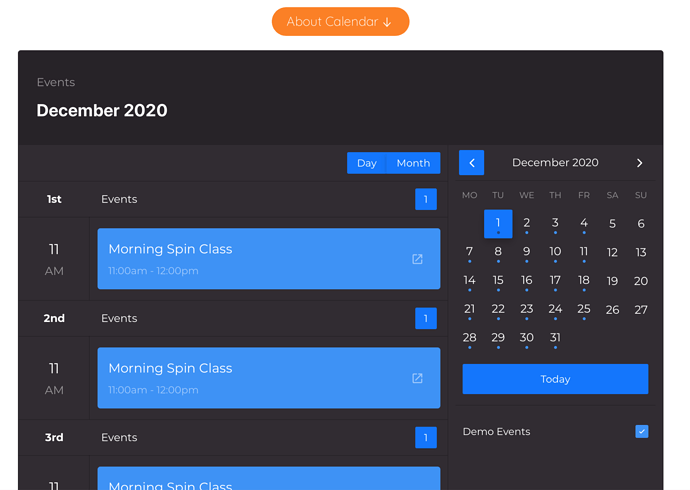 I will check this with my other browsers next.

the story goes on:
I’ve tested your URL in three of my webbrowsers (Safari, Vivaldi, Chrome) and also on Safari for the iPhone. On all devices the before mentioned screen displays look the same:
only the internal events are displayed on calling the page, the “gym” events (from google calendar) will only be displayed when using the back-arrow.

I haven’t noticed this on my productive page because there I’ve dublicated the events with Opt+drag of an already existing event.

Just to confirm, same behavior on my iPad. Recurring events do not show up in the month, until switching forward to the next month and then switching back again …

So sorry for the late reply and the late response on support for this : /.

I have been slammed and I’m also working on a new Kalendar 2 stack that is much more robust than the original. I just noticed the year not working properly and I will take a look at it right away. Hopefully it will be an easy fix.

My apologies again and thank you~

This seems to be the source of the issue. I will look into it today and try to get it fixed.